While the congregation is the primary singing ensemble for our liturgies, St. Andrew’s On-the-Sound is fortunate to have a choir that assists in leading worship at the 11:15 AM Sunday service during the academic year and at special services throughout the year, such as during Holy Week and on Christmas Eve.

Normally singing from the second Sunday of September to the second Sunday of May, this dedicated group of vocalists enhances our liturgies by providing at least one anthem each week and lending support for the congregation. Several section leaders are contracted by the church to sing each week and provide a strong foundation for the choir, but volunteers from the parish are always welcome. We need more folks from all voice parts, so please contact Director of Music C. Justin Smith at [email protected] if you would like to participate.

While the choir does sing each Sunday, the section leaders and director do understand that volunteers may not be available each Sunday of the entire academic year and are welcome to take Sundays off if needed.

The organ at St. Andrew's On-the-Sound was built by the Cornell Zimmer organ company of Denver (Charlotte), NC in 1995 as Opus 15. The organ was designed to incorporate pipes (as found at the back of the Nave) and high tech digital voices provided by the Walker Technical Company of Center Valley, PA. The digital voices are heard from the back of the Nave and from the front of t… 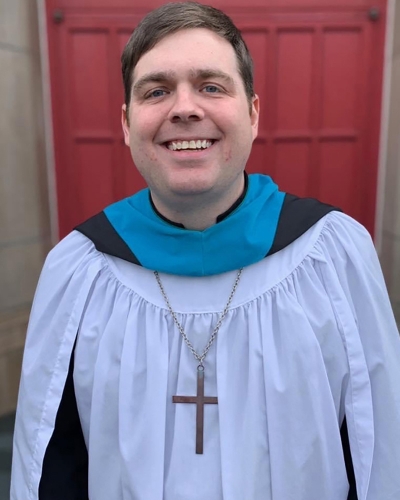 
Organist and church musician C. Justin Smith is an active member of the classical music community of Wilmington, North Carolina, where he serves as Organist & Choirmaster at St. Andrew’s On-the-Sound Episcopal Church. He is also the business operations coordinator at UNCW for Campus Life (student union), working with student organizations and student government on their finances and accounting. Musically, he has previously served as Minister of Music and Organist at Pearsall Memorial Presbyterian Church and as Organist/Choirmaster at St. John’s Episcopal Church. Very active in the American Guild of Organists, he is currently treasurer of the Wilmington chapter, and has served as the District Convener for the state of North Carolina overseeing the state’s chapters, as well as past dean, secretary, newsletter editor, and member-at-large for the Wilmington chapter. He is a graduate of Wake Forest University, having majored in political science and music. At Wake, he studied organ with noted composer and organist Dan Locklair, while being awarded prizes in music and inducted in the political science honor society Pi Sigma Alpha. During college, he directed the music for the Wake Forest Episcopal Student Fellowship and was Chapel Organist for services of University Worship. After college, he moved to Wilmington to take up the full-time Director of Music and Organist post at Little Chapel on the Boardwalk Presbyterian Church in Wrightsville Beach, where he served for five years. In addition, he earned his Master of Public Administration degree in public and nonprofit management from the University of North Carolina Wilmington, graduating as the valedictorian and receiving the MPA Graduate of the Year and MPA Research and Service awards.

Our name says a lot about us: St. Andrew’s On-the-Sound. While not overlooking Wrightsville Sound, we are close enough to the beach that our basic attitude is pretty laid back. We can’t help but feel that we track a little sand into the church whenever we enter. Our worship is traditional, but relaxed; our focus is on living our faith as God’s family in this place. Young families with kids, retirees, and folks in between find a comfortable home here.

Bring your faith and your doubts, your experience and your questions, and, above all, your hopes. There is comfort and joy in our community as share in worship, fellowship, learning, and service.

Our namesake, St. Andrew was the first evangelist and came to Jesus trusting him as his teacher. Andrew wanted to learn, to know God, and to understand Jesus as Messiah.

We gather together in worship as we rejoice, pray, and contemplate the wonder of God. Our worship is best described as traditional and relaxed. Please do not worry about what to wear and when to stand up; after all Jesus wore sandals and we do too.

At St. Andrew’s On-the-Sound we do not tell you what to believe. You are invited into the journey at whatever place you are in your life. We are all sharing this journey together.

This church is known as one of the most family-friendly churches around!

Your presence is a gift to St. Andrew’s and we are honored to welcome the wiggling and noises children share in worship. Please know you are welcome, come and be comfortable.

"Jesus reached for a little child, placed him among the Twelve, and embraced him. Then Jesus said, "Whoever welcomes one of these children in my name welcomes me; and whomever welcomes me isn't actually welcoming me but rather the one who sent me.”
Mark 9:36-37 (CEB)

We are located on the way to Wrightsville Beach at the corner of Airlie Road and Military Cutoff Road/Oleander Drive, next to Airlie Gardens.

“For where your treasure is, there your heart will be also” (Matthew 6:21). We could as easily translate this as “where your money is…” and not miss the mark. When we give to support St. Andrew’s On-the-Sound we are helping to secure a place where our hearts feel at home. Everything we are as a loving community, our worship, our study, our service, and our play is founded on what we give together.

We are rediscovering what it is like for “two or three to gather” and we are rediscovering what it is to worship, study, and play together. We are grateful for those who support this church by their presence Sunday to Sunday, and we invite others to join us again. One of the sentiments I hear most often these days is, “It’s better when we’re together.”

As we move forward into 2023, we can only do so with your continued support...Click to find out more.

Learn about planned giving and the endowment fund.

Other Ways to Give